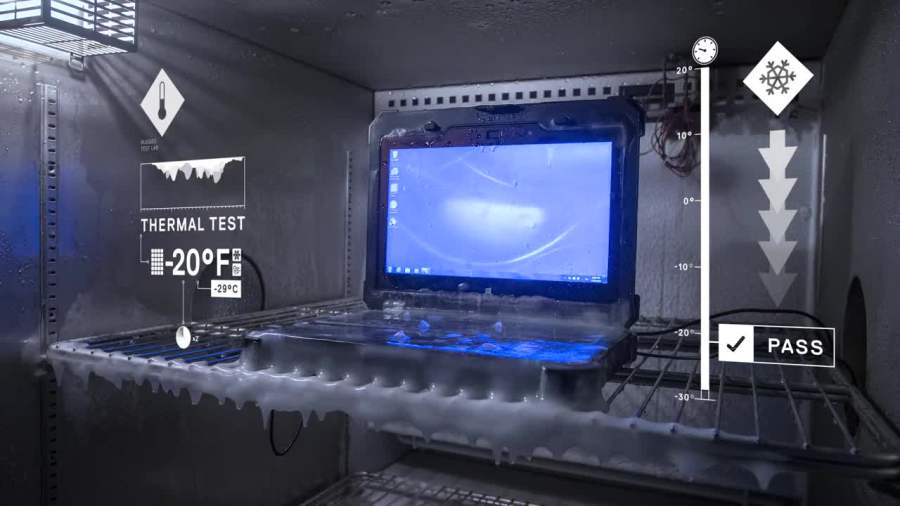 Semi-rugged devices, which are increasingly being called business-rugged by marketers, are usually enhanced versions of commercial off-the-shelf (COTS) hardware. The components are the same, but they are protected better.  For example, a semi-rugged laptop might have a thicker case, a gel-mounted hard disk drive and a spill-resistant keyboard. Fully-rugged devices are designed from the inside-out to work in extreme temperatures, to be impervious to being dropped, to resist shocks and vibrations and to be dustproof and waterproof. A fully-rugged laptop may have a solid state hard drive, which has no moving parts, runs cool and doesn’t need for a fan. (another moving part that adds weight to the device.)  Ultra-rugged devices, which are usually designed to meet precise specifications for military use, are made to handle the harshest environmental conditions. An ultra-rugged laptop can be left out in a sandstorm, frozen in a blizzard or sent on a vibrating rocket into space without any detrimental effects.

The levels of ruggardization are not standardized, which means that vendors have the freedom to use the labels as they see fit. Most vendors incorporate other values in their self-evaluations to provide potential customers with some assurance that their products deserve the label they have been given. The two most common values cited are from the Ingress Protection (IP) Code, a system for classifying the degrees of sealing protection provided by the enclosures of electrical equipment and MIL STD 810, a series of testing guidelines set by the U.S. Department of Defense for military and commercial equipment.

SO HOW IS RUGGED DEFINED?

These specifications are almost always listed on the product data sheet.

The temperature spec defines the operational temperature range of the unit. Working with a unit above or below this spec may cause the unit to fail.

MIL-STD-810G  is a standard issued by the United States Army's Developmental Test Command. The standard consists of a series of various environmental tests to prove that equipment qualified to the standard will survive in the field. They were designed specifically to test military equipment, but are now used to test a wide range of both military and civilian products, including mobile computers.

IP stands for Ingress Protection, and an IP rating is used to specify the level of environmental protection of electrical equipment against solids and liquids. In other words, it tells us what amount of size of solids or liquids can get inside the enclosure and possibly damage the device. It is defined by international standard IEC 60529.

MIL-STD-810G is comprised of about 24 laboratory test methods that cover a wide range of environments, from the ability to perform at high altitude (method 500.5) to the ability to survive mechanically induced shocks (method516.6). No mobile computer has been tested to all 24 methods; many of them do not apply to mobile computing. But generally speaking, the more methods tested (and passed), the more rugged the unit. The most rugged units including the Handheld Algiz 7 and Algiz 10X ultra-rugged tablets have been tested to between 8 and 10 MIL-STD-810G methods. Also, when evaluating a data sheet, pay attention to the methods that apply to your situation. If you will be working at over 10,000 feet of elevation, make sure the unit has been tested to the MIL-STD method that covers altitude. If you are going to be working in rapidly changing temperatures, make sure the unit has been tested for temperature shock.

THE IP DEFINITIONS - WHAT LEVEL DO YOU NEED?

From the chart we can see that, technically speaking, the dust spec has 7 different levels, level 0 to level 7 and the water spec has 9 different levels, level 0 to level 8. But, practically speaking, rugged computers all have at least a dust protection level of 5 and water protection level of at least 4. Nevertheless at the operational ends of the scale, the levels can make a big difference. For example, a dust level of 5 means that some dust can get into the unit, whereas level 6 unit is completely dust proof.

In another example, an IP67-rated unit is totally dust proof and is capable of immersion in water for at least 30 minutes to a depth of 1 meter. This unit would be an excellent choice in either a very dusty or dirty environment or one where it may be possible to drop the unit into a body of water like a lake or a stream. On the other hand, an IP rating of IP54 is only protected in a limited way to dust and water and should never be fully immersed.

Increasingly, rugged device manufacturers are using the term IP68. What is important about the IP68 rating is that you need an additional detail in order to evaluate the true meaning. If IP67 is immersible in water, how can IP68 be more rugged? The secret is in the additional detail. For a true IP68 rating, the manufacturer must specify the depth and the length of time for the immersion. If the 1-meter for 30 minutes mark of IP67 isn’t enough for you, you should be sure to compare the specifics if a device promises IP68.

Knowing what the specifications are and what they mean can provide invaluable information about how a unit will function in the field and over the long term. So, use the specifications to help you pick out the best unit for your situation.